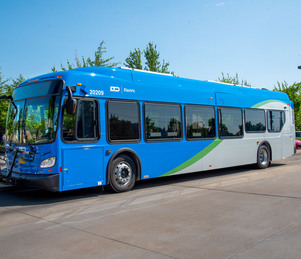 Since the baseline assessment in fiscal year 2018, LTD has reduced its GHG tailpipe emissions by 77% by investing in renewable diesel fuel for its hybrid and diesel-powered buses. Renewable diesel fuel, often called R99 because it is comprised of 99% renewable and 1% fossil fuels, is derived primarily from plant and animal feedstocks. It is chemically identical to fossil diesel, making it a drop-in fuel that can be used in traditional diesel engines. LTD’s total percentage of renewable fuels used in owned fleet vehicles has increased from 5% in 2018 to 64% in 2021.

In addition to its investment in renewable fuels, LTD is also replacing 30% of its diesel bus fleet with battery-electric buses, which will continue to reduce its emissions over time. Eleven of these buses entered revenue service at the start of fiscal year 2022, the year after the most recent GHG inventory was completed. 19 more electric buses are on order and scheduled to arrive later this year. All of the District’s mechanics have completed rigorous training to service the electric buses safely, and are high voltage qualified.

The 77% GHG emissions reduction represents just over 8,000 metric tons of carbon dioxide removed from the atmosphere. According to the US EPA, this is equivalent to taking more than 1,700 vehicles off the road for a year, or the amount of carbon sequestered by growing more than 130,000 tree seedlings for ten years.

“It is exciting to see the progress the District has made to implement its Climate Action Policy and support the City of Eugene’s, Lane County’s, and state of Oregon’s climate action initiatives,” said Mark Johnson, LTD’s Interim General Manager. “Our success to date is a reflection of our elected officials and Board of Director’s leadership as well as LTD staff's commitment to a safe and healthy environment.”

“The efforts LTD makes to reduce the amount of greenhouse gases released into the air is only the first step,” Johnson said. “Taking time to ride the bus, walk, car pool, or pedal a bicycle to the places we need to go is the next step LTD and the community need to take together to improve the air we breathe and the environment.”