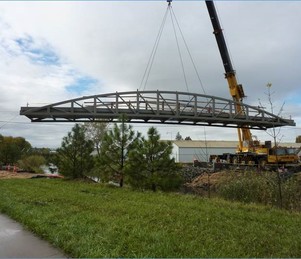 A 100-foot crane lowered the second of two bicycle-pedestrian bridges over Amazon Creek on October 27, providing a safer and more direct passage for bicyclists and pedestrians traveling between neighborhoods south of the creek and West 11th Avenue.

Lane Transit District is installing two new bicycle-pedestrian bridges as part of the West Eugene EmX project. The bridges, plus a third bridge to be built next year by the City of Eugene, are funded through a $2.9 million ConnectOregon V grant. This investment will allow residents who live south of Amazon Creek to easily connect to West 11th Avenue businesses and the West Eugene EmX bus rapid transit service that will launch next fall. The bridges also enhance Fern Ridge Path and the rest of the path system for recreational walking and bicycling.

The bridges and path connections are one part of the multi-modal enhancements occurring with the West Eugene EmX project. Enhancements include improved sidewalks and bike lanes, safer intersections, bus shelters, accessibility features and landscaping.