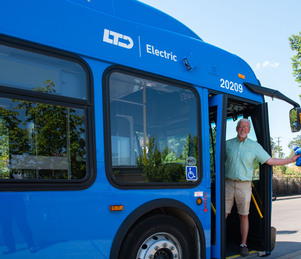 "I am honored to be elected by my peers to serve as Vice President of the LTD Board of Directors," Nordin said. “It is an exciting, and perhaps transformative time for LTD. I look forward to continuing to work with other board members to govern the District."

Previous Oregon Governor John Kitzhaber appointed Nordin to the LTD Board of Directors. He was subsequently affirmed by Governor Kate Brown in 2015. In addition to his LTD committee assignments, he has also actively served the District and the community as a member of the LTD Budget Committee (2009 - 2015), a member of the Cottage Grove Planning Commission (2000 - 2005), and as a Community Sharing Board Member (2000 - 2005).  He founded the Friends of LTD in 1995, Co-founded the Friends of Mount David in 2001, and is a founding member of the Board of the Cerro Gordo Land Conservancy.