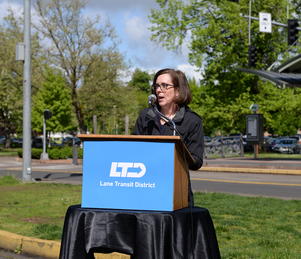 “The transformation of a transportation corridor would help improve the economic vitality of the Springfield/Eugene region and the entire state,” says Oregon Governor Kate Brown. “To achieve this, Oregon needs a transportation package to make critical investments in seismic retrofitting and investments in transit to reduce congestion and give more choices to Oregonians.”

“Imagine a future with safe and accessible sidewalks and bikeways, redeveloped land with residential, commercial and open space near downtown and the U of O, access to the Willamette River via the Riverfront Park and path, and Glenwood as a place filled with activity and economy.” Christine Lundberg, Mayor of Springfield

“EmX has revolutionized transit in Eugene and Springfield. Our Bus Rapid Transit system has many of the same amenities that make light rail so popular, but it operates at one-tenth the cost.” Aurora Jackson, LTD General Manager

“Once the West Eugene line is complete, EmX will allow passengers to travel 16 miles between Springfield and Eugene, connecting residents to 56,000 jobs along the EmX line.” Gary Wildish, LTD Board President

The Governor’s tour highlighted the vision of both communities to transform corridors into complete streets with improved transit. This and other similar multimodal transportation projects can help improve economic vitality in the region and help make Oregon a hub for transportation innovation.